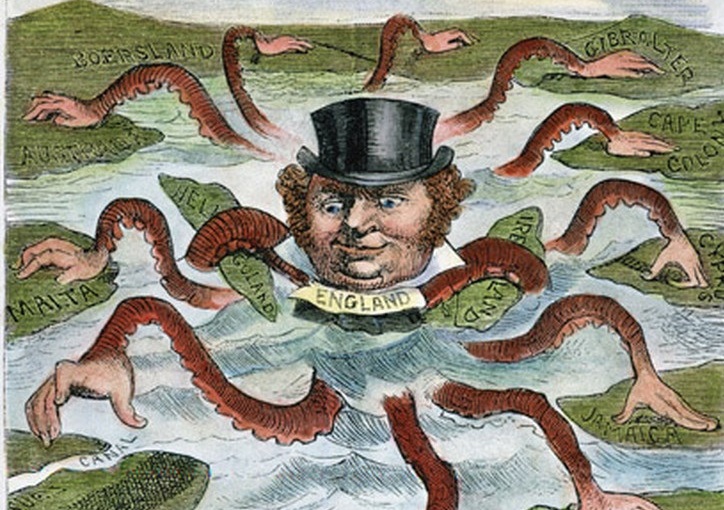 I have a number of issues with the modern ‘anti-imperialist’ movement, upon which I have written to some extent, though some brief thoughts are as follows:

It seems to me that in trying to ferret out crypto-imperialists within the circles of western power, they have themselves started to adopt colonial patterns of thinking, with their subsequent theories therefore to some degree tainted by that which they so vehemently oppose.

For example, the idea that the modern developing world, and its many hardships, are defined principally by Europe’s imperial legacy therein; or even that the international system itself is shaped by imperialism (past or present). To me this is a notion of extreme arrogance and solipsism, which rivals in essence any put forward by a neo-imperialist.

To suggest that the difficulties faced by developing nations are fundamentally the cause and responsibility of the West is to remove responsibility from those indigenous people in their own affairs. This is an incredibly pernicious concept, not least in that it systematically undermines the agency of people in shaping their own society (for better or worse) and therefore their ability to improve it. Furthermore, by placing such a rigid emphasis on hierarchies and colonialism one condemns the developing world to colonialism in perpetuity. Afterall, how can one escape a state of abjection, when its very rasion d’tre is at the will of the rich and powerful?

Much like the theories it attempts to critique, it is an overly ‘western centric’ attempt to diagnose the problems faced by subject countries. It is also based in part on a misunderstanding or dismissal of the concerns relevant to individuals of those countries. It is difficult to argue these days that colonialism is a prominent or relatively important concern to citizens of, say, the Philippines—the object of Kipling’s infamous call to empire, ‘the white man’s burden’—but rather a host of logical concerns surrounding crime, governance and livelihood, much as would be the case for anyone, regardless of their citizenship or historical condition.

Equally troubling is the tendency for this narrative to create intellectual union with some rather unsavoury and reactionary (to say the least) forces around the world, which has done little to alleviate the conditions of the deprived, and for the most part only served to make them worse—again, this is not at all dissimilar from the dialectic used by imperialists, in supporting strongmen and dictators, albeit to different ends.

Of course, I do not discount the hideous legacy of imperialism, and the impact it has undoubtably had on many countries throughout the world; nor that an anti-imperialist critique is no longer important or necessary. However, a continuous and slavish focus on American foreign policy for example, at the expense of more pressing and relevant examples, has in many ways undermined it as a serious or reasonable critique.

There are a great many more points I would like to address on this subject, and I shall do so over the coming weeks, in a number of more specific articles and essays.